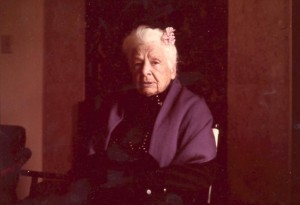 The pioneer of this unique approach was Dr Ida P. Rolf (1896-1979), a brilliant and original American scientist who developed the Rolfing® system when she was struggling to deal with the physical problems of her family and friends.

In 1920, Ida Pauline Rolf received her Ph.D. in biochemistry from the College of Physicians and Surgeons of Columbia University. Despite the resistance she faced as a woman in the field of science, she furthered her knowledge of the body through research in organic chemistry at the Rockefeller Institute. Driven to find solutions to her own health problems as well as those of her two sons, she spent many years studying and experimenting with different systems of healing and manipulation.

Throughout most of her life she was intrigued with and explored many forms of alternative healing including homeopathy, osteopathy, chiropractic and yoga. The notion that proper alignment, physiologic function and anatomical structure are related is the basis of many of these healing methods. Dr. Rolf agreed that the body functions best when the bony segments are in proper alignment. She added her observations that lasting improvement in alignment and an overall sense of well-being required a closer look at the effects of gravity on our bodies. She believed that the imbalances in structure placed demands on the body’s pervasive network of soft tissues: muscles, fascia, tendons and ligaments, thereby creating compensations throughout the body structure. 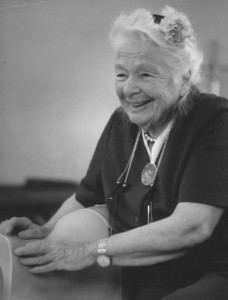 Dr. Rolf posed this fundamental question: “What conditions must be fulfilled in order for the human body-structure to be organized and integrated in gravity so that the whole person can function in the most optimal and economical way?” Her life’s work was devoted to this investigation which led to the system of soft tissue manipulation and movement education that we now call Rolfing. In order to pass along her work to others and to make the education process accessible, she developed an expedient series of ten sessions, which came to be known as the Ten Series.

Dr. Rolf continues to be recognized as a pioneer and leader in whole-body alignment through soft tissue manipulation and movement education. Since her death in 1979 at the age of 83, the Rolf Institute of Structural Integration has continued to share her work by certifying Rolfers and Rolf Movement Practitioners, supporting research, and building upon her inspiration. Today, there are more than 1,350 Rolfers and Rolf Movement Practitioners in private practice worldwide.

“My daughter and I have been going to Wanda for several months for Rolfing sessions. My body feels lighter and is more mobile than before. I am able to twist my body further than I have in years. Also, my back does not hurt anymore when I stand on tile. We have seen a big improvement in my daughter’s lower back area that has been plagued with Scoliosis since she was a toddler. Thank you, Wanda, for your hard work and patience with our daughter.”

“Wanda Silva’s expertise in the art of Rolfing is amazing. Her knowledge of body work and restructuring comes with care and compassion. During my time with her I was relieved of chronic pain throughout my body and began to know myself from inside. I have never felt so confortable in my own skin. Thank you Wanda!”

“Wanda is a very skilled and knowledgeable rolfing therapist. My sessions with her have brought major changes to my body-mind-emotional system. Posture is now upright and open, walking is an easy and fluid movement, and breathing is efficient rather than a chore. Wanda’s use of rolfing enabled me to dredge up and release long buried emotional debris. We are very fortunate to have a person of Wanda’s caliber in our midst."

“I have received work from several Rolfing therapists in years past, none as masterful as Wanda Silva! Wanda is a potter, re-molding the body. She combines her education, expertise, skill, intellect, and intuition to determine how and which area of the body needs to be remolded. She then works diligently on the tissues to create change. And she does this, incredibly, without creating pain… a talent that not many other Rolfing professionals have mastered. I highly recommend Wanda Silva’s work!”

“My wife Courtney and I have been seeing Wanda for a few months now. We feel as we have been “put in touch with ourselves”, both mentally, and physically. Wanda has an amazing ability to learn your body, understand its troubled areas, and get to the root of the problem. It is as if she is able to re-build you, make you understand that this is the way your body should be, and what to do to maintain that state of being. We have both gained tremendously from these sessions. We thank you and will continue to tell people about this wonderful skill.”